Over the years, there has been intentional word mixing by some officials in order to draw independent homeschoolers back into the public schools.  Across the board, confusion often reigns as to who or who is not a homeschooler.  It usually lies on the homeschool community’s back to educate on the issue, regardless of which educational choice is best for the child and family. 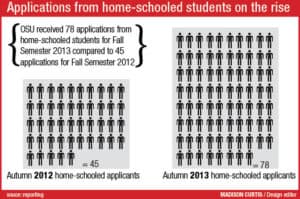 In a statement from the Office of Enrollment Services, emailed to The Lanternby OSU spokeswoman Amy Murray, said the number of home-schooled student applications has risen significantly over the last several years.

“For Autumn 2013, we received 78 applications, which was an increase from the previous year of 45,” Murray said in an email.

There usually are only a “handful” of applications from home-schooled students, who follow the same admissions process as other applicants, Murray said.

The assumption is the number of admissions is fairly equivalent to the number of applications, or the OSU student paper – The Lantern – wouldn’t report it.  There are many universities announcing their availability to the homeschool crowd.  It seems to be a win-win collaboration.

Australia’s Capitol has an increase in home educators.

From The Canberra Times:

WHEN school starts back this week, there will be no forgotten lunches or fights over homework at one Campbell household.

Shannon and Trude Armstrong are part of a growing group of Canberra parents choosing to educate their children at home.

According to the ACT government’s Education and Training Directorate, 196 students are registered for home education in Canberra this year, a 70 per cent increase on 2010.

There’s the usual naysayer of homeschooling via a University of Canberra professor and “expert in pre-service teacher education and student wellbeing.”
Read more…

It wasn’t a stretch to assume Virginia’s religious exemption would pop up with some bill writing power in Richmond.  For all the wrong reasons, Joshua Powell’s widespread story caught attention from the right people.  Delegate Rust’s proposal comes in the form of a Joint Resolution requesting the Department of Education to study the religious exemption to compulsory school attendance.

Mom’s the word: Home is where the school is
By Graham Wood

Le Cordeur said she found scant resources and little support in 1996 when she began. Shirley Erwee, who lives in Hermanus and has been homeschooling for 16 years, said when she began, also in the late 1990s, she had to rely mostly on resources from the US.

Instead of losing students to online options and home-schools, proposed program would try to recover, retain kids

“We want to draw those kids back and draw that money back to the school district.”

It’s not “about the kids” and their education?  The goal is saving and drawing money back to the school district.

Here’s more information in this link from the Minnesota Department of Education on the state’s “online learning” choice.

Background to Friend of the Court Filing for Romeike Case

Last month, the Alliance Defending Freedom (ADF) group presented a friend-of-the-court brief to the United States Supreme Court in favor of the Romeike family’s United States political asylum from Germany. The various organizations associated with the defense of the family also provide fuel for often unfortunate tales in modern home education’s historical emergence. A synopsis showing this particular home-school posse’s story is below, keeping in mind many of these groups are not associated with most homeschooling families.  That could very likely include the Romeike family and their lack of knowledge of some shady backgrounds.  Even though Uwe and Hannelore Romeike seem to have chosen Home School Legal Defense Association (HSLDA) commander, Mike Farris, to lead their legal and publicity positions.